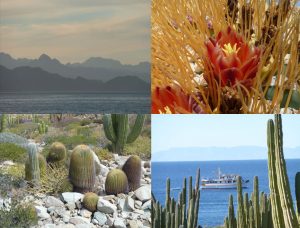 Islands of the Sea of Cortez (Ted Kipping)

The islands of the Gulf of California/Sea of Cortez are often called the “Galapagos of the North” because of the tremendous endemism (species found NOWHERE else) as a result of their being cut off by rising sea levels after the end of the last Ice Age. It is a visually stunning journey appreciating the uniquness of each one with the bright contrasts of land, sky and water. The Gulf is an arm of the Pacific Ocean and very rich in marine mammals and the wealth of marine species which sustain them.

Ted Kipping is a Life Member of the San Francisco Cactus and Succulent Society (also a wide diversity of others). He is intensely interested in the natural world and all of horticulture. His photography has been widely published. Come enjoy the vicarious visit to the Islands of the Sea of Cortez.

Gary and Ellen Stubblefield will be this month’s featured growers.

For the Show & Tell table, we will feature Fouquieria and Bursera on the succulent side and Echinocereus on the cactus side, and anything else looking nice that you would like to share.