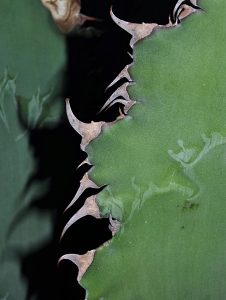 Brian’s program for the April meeting will be something of a departure from his previous talks. As a long-time student of the genus Agave, he has been to Mexico and the southwestern U.S. many times to see them in habitat. He has also grown many species both at the Ruth Bancroft Garden and in his own greenhouse, and he has made numerous hybrids of these remarkable plants. Over the years, he has accumulated many photos highlighting some of the features he likes best about agaves, such as their incredible teeth and dramatic terminal spines, the embossed impressions made on their leaves as they unfurl from the central growing point, and the wonderful colors taken on by many species as they flower and reach the ends of their lives. He has gone through hundreds of photos and selected ones that he thinks live up to his title of “Agaves as Art”.

Brian Kemble is the VP of the San Francisco Succulent & Cactus Society, the Curator at the Ruth Bancroft Garden in Walnut Creek, and a board member of the Cactus & Succulent Society of America. He has written numerous articles on succulent plants (many of them published in the pages of this group’s newsletters), and has contributed photos to quite a few books in the field. He is a long-time member of the club and has given numerous presentations in the past.

Brian will also be this month’s featured grower.

For the Show & Tell table, on the succulent side we will feature Agave and Mammillaria on the cactus side, and anything else looking good that you would like to share.