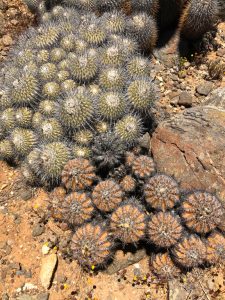 In November of 2017, Kelly Griffin traveled to Chile with his wife Denise to revisit to some wonderful cactus habitats, visiting as many localities as they could pack into a modest trip. They saw many representatives of genera such as Copiapoa, Eriosyce, Eulychnia and Neochilenia (an old but justifiable name). November is spring time in the southern hemisphere, so we were also treated to a number of blooming bulbs and other plants like Calandrinia (Cistanthe).

This was a beautiful and special trip as the northern part of Chile had gotten some rain earlier in the year and was not nearly as parched as it can be. They also visited some small Islands off the coast to see both plants and animals, including whales and penguins. They took a short detour to the infamous San Jose mine where 33 people were trapped half a mile underground in a mine collapse. It was a story with a happy ending, as all of them survived the two month ordeal.

Kelly has given presentations to our club many times in the past, and he is one of our most requested speakers. He is a manager of Succulent Plant Development for Altman Plants, the largest producer of succulent plants in the country. His favorite groups include Agave, Aloe, Echeveria and Dudleya, but his interests include many other plants as well. As part of his life’s work, he has introduced many succulents and created many cultivars that have been nudging their way into gardens and patios in this country and around the world. He has traveled extensively worldwide, documenting plants and collecting seed and pollen for propagation and hybridization.

Please bring baked goodies, fruit, snack food or a beverage if your last name begins with the letters x to x, and any other members who would like to contribute this month.