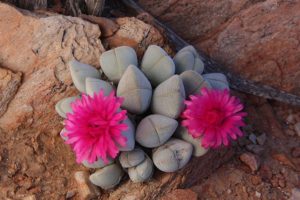 Mesembs is derived from the old family name, Mesembryanthemaceae, given to the ice plants and their relatives, now placed in the family Aizoaceae. Many commonly grown members of the family are small shrubs or ground covers, often called ice plants, valued for their outrageous flower displays and subtle leaf colors. Several are real coastal dwellers and have colonized beaches the world over, with Carpobrotus edulis being the most widespread along California’s coast.

Other mesembs are amazing mimicry plants which look like rocks. A prominent example is the genus Lithops (known as living rocks), and these are joined by a wide array of other compact mesembs—’flowering stones’—grown for their peculiar camouflage, fine markings, striking flowers, and horticultural challenges.

Many specialist collections are dedicated to this, the largest family of succulent plants. With nearly 2000 species, plus many more hybrids and cultivars, it’s easy to see why mesembs are popular.

Mesembs are sometimes tricky to cultivate, because they are unforgiving of incorrect watering, requiring a summer or a winter resting period, depending on the species. Part of the challenge of growing mesembs is in understanding where they originate. The heart of mesemb country is South Africa, and Russell has visited this region numerous times, exploring both summer- and winter-rainfall regions. Many mesembs are found in the winter-rain and fog belt along the west coast of southern Africa, extending from Cape Town well into Namibia, a region of such succulent diversity and abundance it boggles the mind.

On Russell’s most recent trip, in July 2017, he found plants languishing after literally years of drought. Yes, there were still abundant rarities in protected spots or areas where the fog managed to penetrate, but Russell’s presentation will also show South Africa in drought: when the living stones get smaller and smaller, and then, die. It’s a way to discover more about the amazing resilience of these succulent plants, that have evolved over the five million years that southern Africa has had wet winters and dry summers and regular severe droughts.

Russell Wagner is a past editor of our club’s newsletter, as well as a former editor of the Cactus and Succulent Journal. Russell is also a book publisher, having founded the Little Sphaeroid Press. He grows a wide variety of succulent plants and bulbs from seed in his Oakland greenhouse, where he has long specialized in compact members of the Aizoaceae, also known as mesembs.