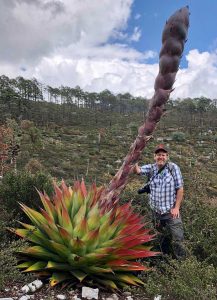 Note: Due to the Pacific Orchid Exposition’s set-up, this month’s meeting will be held in the adjacent Rec Room & Garden Club Room, not the Auditorium. Parking in the back of the building may be in use and/or unavailable to us. Please plan accordingly.

Jeremy Spath will be speaking about select agaves he has photographed in habitat, as well as ones he has grown and cross-bred. He will explain his ideas on which traits to consider when crossing, and he will share some of the results of his efforts.

Jeremy began his plant career 12 years ago at the San Diego Botanic Gardens (formerly known as Quail Gardens) in Encinitas, CA. While at the gardens he was exposed to many different plant groups but was most attracted to succulents, cycads, bromeliads, palms and bamboos. Inspired by the plants, he felt an urge to travel into the field to study them, and he has been hooked ever since the first trip. 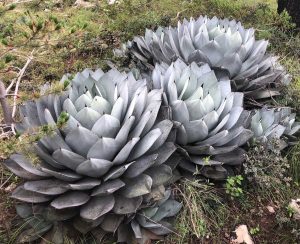 Jeremy spends most of his days working with plants, but is happiest in the field, since to him, nature is truly the best landscaper.

This month’s featured grower will be Melanie Hamilton.

For this month’s Show & Tell table, we will feature we will feature agaves on the succulent side and columnar cacti on the cactus side, and anything else looking good to share.