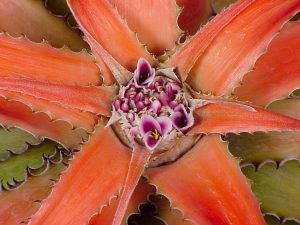 seven of the current eight bromeliad subfamilies. This is not including those that just grow on the ground or on rocks, but rather restricting the term terrestrial to only those that cannot normally live without soil. This group has been rather neglected by hobbyists and even taxonomists due to their size, spiny foliage, and the difficulty in identifying and obtaining them. However, in recent years a renaissance of sorts has swept the genre, and terrestrial bromeliads are beginning to get the attention that they deserve. In some cases, certain groups have been focused on, such as Cryptanthus, which even have their own society! Other fanciers prefer the plastic-leaved types such as Dyckia and Hechtia, ignoring the Cryptanthus and other soft leaved varieties such as Pitcairnia altogether. 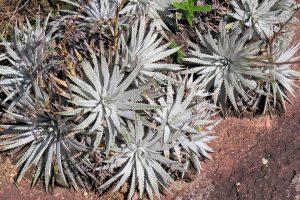 Each of the terrestrial genera has its own unique characteristics that make them attractive to different growers. The very spines that turn off some growers cause shivers of excitement in others. The lure of terrestrial bromeliads is inexplicable. Fanciers of Tillandsias or Neoregelias often look down their noses at the spiny, sometimes scruffy or even occasionally deciduous terrestrials… and sometimes the people that love them. Visiting clubs for programs and sales, it is often curious to see how our spiny treasures go. At some clubs they are utterly ignored whilst at others they are snapped up first thing. For sure they are an acquired taste, and rarely the first choice of a bromeliad novice, unless they came to our folds from the ranks of a succulent club. One thing is certain: once “hooked”, terrestrials get under your skin like few others, pun intended!

Dennis Carthcart has always been the dreamer and adventurer. He started his nursery Tropiflora in the early ‘70s as an outgrowth of a bromeliad collecting hobby. A “hobby gone bad” he says. Following years of traveling the Caribbean and Latin America, he discovered bromeliads, or they discovered him, and the direction of his life was changed for evermore. Collecting and exploring were always his first interests in the plant world, and over the years he and his wife Linda have visited over 28 countries on hundreds of trips and expeditions. Together they have made travel, adventure, plant exploring, speaking, writing and the nursery business a way of life. He and Linda are now passing their passion for plants on to their children, to take Tropiflora into the second generation.

Dennis will also be this month’s featured grower.

For this month’s Show & Tell table, we will feature we will feature terrestrial bromeliads (Hechtia, Dyckia, Puya, Deuterocohnia, etc.) on the succulent side and Stenocactus (a.k.a. Echinofossulocactus) and Thelocactus on the cactus side, and anything else looking good to share.

Please bring baked goodies, fruit, snack food or a beverage if your last name begins with the letters S to Z and A to B, and any other members who would like to contribute this month.