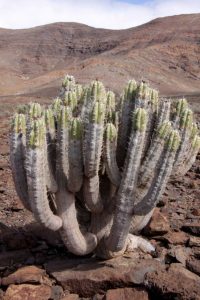 Russell Wagner, mesemb specialist, publisher, and succulent explorer, went back to the Canary Islands twice in 2018. Two previous trips saw him hiking through Tenerife, Grand Canaria, and La Palma. This time, he went to extremes, spending four days in Fuerteventura, a large, volcanic island of extraordinary beauty in the dry eastern end of the archipelago, and a few months later returned to La Gomera, a round green island resplendent with succulent plant life, as well as relict laurel forests, quaint villages, and excellent food. Rarely visited and sparsely populated, but with excellent roads and well-marked trails, the island is paradise for succulent-lovers and solitude seekers.

Russell will share his beautiful photography of Spain and its cusine, architecture, and scenery as well as giving us a deep-dive look at the island’s rarest succulents. Fuerteventura, for example, has an endemic spiny euphorbia known from just one small valley, while La Gomera hosts at least six species of Aeonium known only to that island, as well as numerous Monanthes (tiny rosette succulents that crave water and perfect drainage, and thus rarely cultivated outside of coastal zones), giant perennial sow thistles, bronze fennels, tree members of the morning glory family, and many other island oddities. 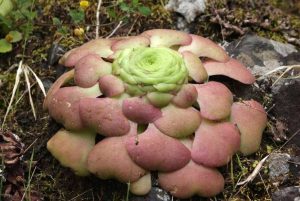 Russell found his passion for plants as a member of the San Francisco Succulent and Cactus Society, where he’s been a member for over 20 years. He served for seven years as editor of Cactus and Succulent Journal, and later published a beautiful book on mesembs with Steven Hammer. A second volume is in the works!

Russell has an extensive collection of (mostly seed-grown, mostly winter-rainfall, mostly South African) succulents, bulbs, and other geophytes, with an emphasis on mesembs. He grows plants in the ground and in his greenhouse in Oakland. He travels extensively to photograph succulent plants in habitat: Mexico three times, South Africa seven times, the Canaries four times, Peru, Bolivia, and Morocco.

At this month’s meeting Russell will offer a selection of seed grown plants unlikely to be found anywhere else.

For this month’s Show & Tell table, we will feature we will feature Canary Island Crassulaceae on the succulent side (Aeonium, Aichryson, Greenovia, Monanthes), and Eriosyce on the cactus side (including Neochilenia, Neoporteria and Horridocactus), and anything else looking good to share.