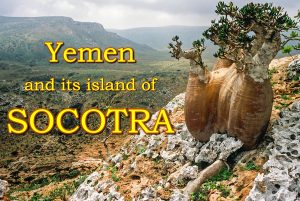 Socotra is the largest island in an archipelago of small islands located in the warm Indian Ocean east of the Horn of Africa. It has been recognized for centuries as a botanical wonderland, with many endemic species, including many succulents. Several of these succulent species reach massive proportions which are unheard of in other members of their genera located elsewhere. Examples are Dendrosicyos socotrana, which is the only arborescent member of the cucumber family (which also curiously lacks vines) and Dorstenia gigas, which may have a stem several feet thick and over 10’ tall.

Socotra is part of the country of Yemen, which has its own interesting succulent flora. Plants on the mainland are adapted to much more arid conditions and can often tolerate colder temperatures, as they frequently occur at very high elevations.

This month’s program on Yemen and its island of Socotra will be presented by Rob Skillin, who visited the area in the fall of 2007. It will feature habitat photos of succulents on the mainland as well as the island. It will also take a look at the very interesting culture and architecture found in the cities and rural areas of the country.

Rob has been growing cacti and succulents for 40 years, and has been involved in various local societies for most of that time, starting with the San Diego C&SS in the 1970’s, then to the Santa Barbara and Bakersfield clubs. He currently belongs to the Central Coast C&SS, of which he was a founding member and first President. He has also been involved with the CSSA as a member of its Board of Directors, and is a CSSA certified judge.

Along with his interest in cacti and succulents, Rob enjoys photography and travel. These threads have come together in a wonderful way during his botanical explorations of the western U.S. & Mexico, as well as portions of South Africa, Madagascar and the Middle East. Many of his photos have been published in articles, on covers of the Cactus & Succulent Journal and Haseltonia, and in The Timber Press Guide to Succulent Plants of the World.

Rob will also be our featured grower for the meeting.

For the Show & Tell table, we will feature Parodia & Notocactus on the cactus side, and succulents from Yemen and Socotra (aloes, adeniums, dorstenias, euphorbias, etc.).

Please bring baked goodies, fruit, snack food or a beverage if your last name begins with the letters C to H, and any other members who would like to contribute this month.