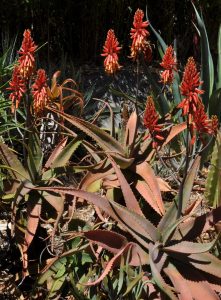 While South Africa has more species of Aloe than any other African country, there are many species found all along the eastern side of the continent, all the way up to the Horn of Africa. These occur in a wide variety of habitats, from savanna to high mountains to areas with lush vegetation. Uganda is in the heart of this swath of Africa, straddling the equator in the east-central part of the continent. The country is home to 24 species and subspecies of Aloe, some of them shared with neighboring countries such as Kenya. This talk will focus on the 24 aloe taxa found in Uganda and the journeys behind mapping and cataloguing all that is currently known about them. The audience will be led through the development and publishing of the Field Guide to the Aloes of Uganda, and will learn some of the details involved in the process of naming a new species. 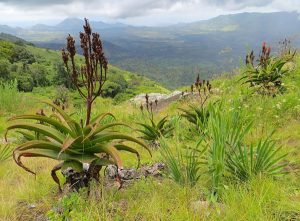 Tom Cole is co-author of Aloes of Uganda, A Field Guide, published in 2016. He has described or co-described several of the Aloe species found in the country. He has spent 20 years working on sustainable agriculture projects in Uganda, Ethiopia and Mozambique, and when in Africa he spends much of his spare time investigating aloes. When in the U.S., he lives in Santa Barbara, and he owns a nursery specializing in aloes: Cold Spring Aloes. He also does landscape work, often incorporating aloes into his garden projects.

Tom will also be the featured grower this month.

For this month’s Show & Tell table, we will feature we will feature Sansevieria on the succulent side and Ariocarpus, Astrophytum, Aztekium and Obregonia on the cactus side, and anything else looking good to share.