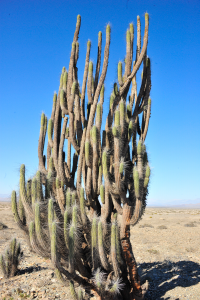 Similar to the coast of Namibia, the coastal and inland region of northern Chile, known as the Atacama, is mainly watered by amazing fogs, “the Camanchacas.” These fog-fed regions, in two of the driest deserts in the world,have some of the most interesting cactus and succulents to be found anywhere. The Atacama of northern Chile has an endemic group considered by many to be one of the most dramatic to have ever evolved, the genus Copiapoa.

There are many different Copiapoa species ranging from small quarter sized subterranean geophytes to giant 1,000-year-old, 300-head mounding clusters. With this presentation, Woody will introduce most of the Copiapoa species, as well as show their relationships and synonyms. Along with the Copiapoa, we will also encounter many other genera including Neochilenia, Neoporteria, Eriosyce, Eulychnia, Trichocereus, as well as many of the other Chilean succulents. Chile also offers some of the best lunar landscapes, geologic formations, and spectacular beaches to be found in all of South America. 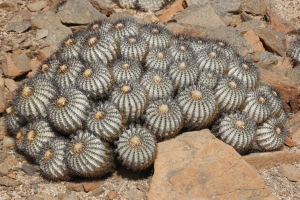 This last August 2018, Woody had the pleasure of leading a group of 20 crazy cactophiles in seven four-wheel drive trucks. Their objectives were to see most of the fantastic plants and spectacular scenery that are to be found in this the land of the Camanchaca. They took some very bad roads to out-of-the-way places, camping out in the middle of nowhere with the scorpions. No restaurants, no showers, no beds, and no bar! These camp-outs were exceptional as they could often see, without light pollution, the Southern Cross and the Magellanic Lights until the Camanchaca fog slowly blanketed the campfire discussions. What an incredible trip it was! Join Woody at the meeting, and hopefully you’ll share his exhilarating experience and the overall magic of this wonderful arid region, the Atacama.

Woody, as he is commonly known, grew up in the Mojave Desert and has had an attraction to desert plants and animals since the early 1950’s. He has been involved with the cactus and succulent world as a grower, field explorer, club and organization leader, writer, photographer, lecturer and presenter.

He has published numerous articles and reviews in various journals (CSSA) and his photography is featured in many books including; “The Copiapoa” by Schulz, “The Mammillaria Handbook” by Pilbeam, “The Cactus Lexicon” By Hunt and Charles, as well as many others. Woody and his wife, Kathy, live in Cedar Grove, New Mexico.

Woody will also be the featured grower.

For this month’s Show & Tell table, we will feature we will feature Othonna and Senecio on the succulent side and Eriosyce (including Neochilenia, Neoporteria, Horridocactus, Pyrrhocactus and Rodentiophila) on the cactus side, and anything else looking good to share.

Please bring baked goodies, fruit, snack food or a beverage if your last name begins with the letters S to Z and A to B,  and any other members who would like to contribute this month.