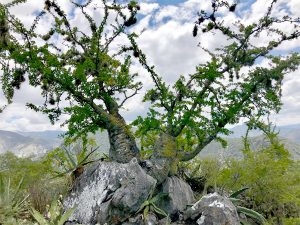 Kelly’s presentation on Nov. 19 will be a succulent-focused talk on one of his greatest loves: Mexico. It is a wide-ranging tour de force adventure taking in some of Mexico’s great succulent plants. He recently returned from a trip to see and photograph some plants he knows well and others he had not previously seen. It was successful, but included some strange new tales and unexpected happenings. He was very pleased to see some fantastic specimens of Fouquieria fasciculata and Cephalocereus senilis in the Barranca de Metztitlan, Hidalgo. Additionally, he will share some insights into recent taxonomical changes regarding Agave mitis (the old A. celsii), Agave ellemeetiana, and Agave titanota. 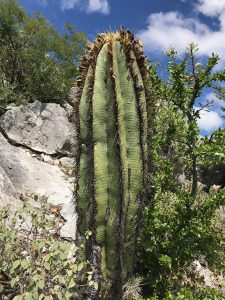 Kelly is well known to members of the San Francisco Succulent & Cactus Society, having given many presentations to the club over the years. He is a notable plant hybridizer, propagator and plant explorer, and is the Succulent Plant Development Manager at Altman’s Plants. He has traveled to over 20 countries to see plants in habitat, including visiting Mexico at least 40 times, taking in 28 of the country’s 32 states.

He has become well known for his hybridizing and is responsible for over 100 succulent hybrids now in the trade, including Aloes, Agaves and Echeverias. His is especially well known for his Aloe hybrids (he has been working on this for 30 years), such as ‘Pink Blush’, ‘Delta Lights’, ‘Christmas Sleigh’ and ‘Coral Fire’. His Agave hybrids are notable too, including such widely grown plants as ‘Blue Glow’, ‘Snow Glow’, ‘Cubic’,’ Black and Blue’, ‘Dragon Toes’, ‘Spawn’, and ‘Crème Brûlée’.

For this month’s Show & Tell table, we will feature we will feature Cotyledon, Tylecodon and Adromischus on the succulent side and miniature cacti (such as Frailea, Turbinicarpus, Epithelantha, etc.) on the cactus side, and anything else looking good to share.

Find out about membership benefits and sign up information.

Catch some of the other local sales and sign-up to receive email news about our next sale in 2020.